MIDDLE SCHOOL GIRLS SOCCER- Coach Chaney and her Lady Warriors  kicked off their season in Roswell against Fulton Science Academy yesterday. “The girls went in to their first game of the season very nervous as many of them have never played soccer before. The Lady Warriors scored 4 goals on Fulton Science Academy and only lost by two. “ I am especially proud of Angelina Cho, who scored our second goal of the game. As one of our newer players, she was nervous but she killed it! Seeing her celebrate with the team after scoring her first goal was already a highlight of the season for me. I truly can’t wait to see how this team progresses and I look forward to playing again next week!” said Coach Chaney.

The Lady Warriors will resume play Tue in the rematch against Fulton Science Academy here at HCA.

ELEMENTARY SOCCER- The kids will have their first practices today! It should be a beautiful day to watch the kids get out there and work on their game.

HIGH SCHOOL BOYS SOCCER – The JV boys kicked off their season yesterday against Fulton Science Academy. They started fast on offense and played sound defense the whole game. The first goal of the season was scored by Jinho Lee off of a corner kick from Peyton Rice and the rest was history. The final score was 8-0. Peyton Rice led the team in scoring with 3 goals while Jinho Lee scored twice, Riley Anderson scored once, Tanner Story scored once, and Jake Lee scored once. “I’m extremely proud of the way they showed up ready to play yesterday. They are improving daily and I’m excited to see how they’ll progress from here.” Said Coach Underwood. The JV team will resume play next Tuesday against Fulton Science Academy. The Varsity boys will kick off their season Thursday evening against Georgia Cumberland Academy in Calhoun.

HIGH SCHOOL BOYS BASEBALL- Opening day for Coach Smith and the Warriors will be next Tuesday as they host Lanier Christian Academy.  Game time 3pm

NOTE– Reminder: March 10th will be our Springs Sports Picture Day at 2:20pm starting with MSG Soccer then Baseball ending with VB/JVB Soccer. 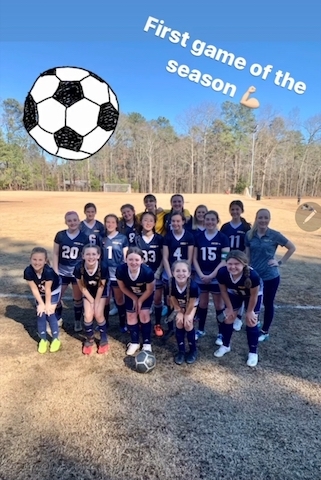